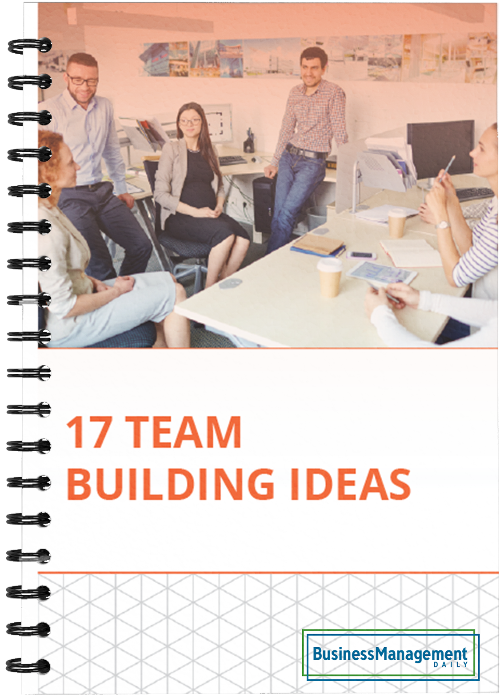 With employees still reeling from workplace budget cuts, now’s a great time for new team building ideas. No, you don’t need an expensive round of paintball to gain the benefits of team building exercises, but you do need to squeeze the most out of them. In this new FREE Special Report from Business Management Daily — 17 Team Building Ideas — we’ll show you how to do that.

Let 17 Team Building Ideas take your leadership skills to the next level. Go from being a manager who oversees people to a leader who molds them into winning teams. Download your FREE Special Report now!

Sometimes it’s not clear how cross-team projects should proceed. Follow these guidelines on corporate team building activities for accomplishing as a group what individuals can’t do alone.

Well-supported teams receive the information, training and rewards they need to keep chugging along. Get 4 leadership prescriptions for coaching your team in 17 Team Building Ideas: The team building kit for managers with team building exercises, activities and games to build winning teams today!

Do your people “get it”?

To find out, use this team building exercise to test their ability to discuss the big picture.

For example, ask each person the same five questions about strategy to see if their answers line up with yours:

Each question gets at the intent behind the strategy. There are right answers and wrong ones. And the answers change as strategy changes.

Team building training: Help your team get comfortable with risk

Encourage your team to take risks? The very idea is enough to make many CEOs shudder.

Because you shoulder the responsibility of keeping performance high for the entire organization, sometimes you may be risk averse. Even acknowledging the existence of risk requires you to admit that you don’t have all the answers. That doesn’t sit well with the image of you as a fearless, confident leader.

Bottom line: CEOs who hone their skills at engaging with risk—who learn to acknowledge the fear and overcome that emotion—can also help others summon their courage and unleash tremendous potential.

Team building training: 10 steps to get your team’s mojo going

Need to get your team’s momentum going, so they’re invigorated and ready for their next goals? Here are 10 steps blogger Terry Starbucker recommends:

With 18 minutes, 20 sticks of spaghetti, a yard of tape, a yard of string and one marshmallow, Tom Wujec believes he can tell you how innovative any team is.

Here’s how to conduct his fun team building game:

After giving a four-member team the list of supplies mentioned above, Wujec asks them to build the tallest free-standing structure they can. The only rule: The marshmallow needs to be on top.

“I believe the Marshmallow Challenge is among the fastest and most powerful techniques for improving a team’s capacity to generate fresh ideas, build rapport and incorporate prototyping—all of which lie at the heart of effective innovation,” says Wujec, who is a Fellow at Autodesk, the leading 2D and 3D technology firm.

Nothing right is going to happen with your team if the basic structure isn’t right. Here are some guidelines:

1. Look for signs that it’s too big. The larger the team, the slower it moves. Consider a smaller team or a tiny executive committee.

2. Dispense with tactical trivia. Toss everything except important work that requires collaboration.

3. Enforce healthy norms. Four universal ones: everybody is as committed as the leader; every issue is on the table; everybody’s voice is heard; and what you say and do when you’re with the team is the same thing you say and do outside the team.

4. Have your team review its structure. Revisit size and tasks.

Whether a group is planning a conference or working on a shared budget, the more cooperative the group is, the more likely it can rise above a challenge. It helps a leader to understand, then, why some groups cooperate more than others.

Learn how to foster cooperation through consistent contributors when you download 17 Team Building Ideas: The team building kit for managers with team building exercises, activities and games to build winning teams today!

Atlassian, an Australian software company, holds something called “FedEx Days” once a quarter, on a Thursday afternoon.

On that day, leadership says to software developers — Go work on whatever you want, with whomever you want. On Friday afternoon, show the rest of the company what you’ve done.

The initiative is called “FedEx Days” because team members have to deliver something overnight.

After a diagnosis, patients at the Mayo Clinic meet with a team of specialists who help them understand what’s happening so they can decide about treatment together, says president and CEO Denis Cortese.

This kind of teamwork is the stock-in-trade of Cortese, who won last year’s top leadership award from the National Center for Healthcare Leadership.

Can you mimic the Mayo teams on behalf of your customers? A conference call up front to plan out services? A whole team descending on your customer’s problem like pit-stop mechanics rushing up to refresh a racecar?

The day after friends, colleagues and family members died in the Sept. 11, 2001, attacks on the World Trade Center, Mark Loehr asked his people to come to the office. Not to work, but to share their thoughts and feelings about what had happened and what they should do about it.

In the ensuing days, the CEO of SoundView Technology encouraged his team to find meaning in the horror by deciding on a project they all could participate in. Instead of making a group donation to victim relief, they decided to contribute one day of the technology brokerage’s profits. In the past, that figure had reached as high as $1 million, a remarkable contribution. But as word spread about what SoundView employees were doing, enthusiasm grew and the company ended up donating $6 million.

Keep information flowing in your corridors and among your teams with these tactics:

Building a culture of trust is key in encouraging employees to share what they know.

— Adapted from “When Knowledge Sharing Turns to Knowledge Hiding,” strategy+business.

Corporate team building: For the sake of your team, fire the prima donna

If you’re a leader who has a prima donna on your team (one who produces great results but alienates everyone), what should you do? It’s simple. Bite the bullet and fire that person.

Find out why and what your justifications should be in 17 Team Building Ideas: The team building kit for managers with team building exercises, activities and games to build winning teams today!

One thing that binds the Zappos team together is an openness with numbers. It shares vital signs not just on the team level, but across the entire company. What are the tenets of a team culture that values such broadcasts? Speak to the masses. Craft and communicate metrics in a language everyone can understand. Make deadlines and accountability visible. At the online shoe company, for example, a finance class teaches every employee to read a balance sheet. Lesson: Broadcast deadlines, goals, responsibilities and progress for everyone to see. Help team members be more aware of each group’s objectives. — Adapted from “The Orange Revolution,” Adrian Gostick and Chester Elton.

Team building training: Teach your team how to respond to change

You’ve laid out how you’re going to hold the team accountable, and they all understand what’s expected of them. You’ve planted responsibility squarely in their laps. But you’re not totally home free.

There’s one more piece of the puzzle left: responding to change.

Get 17 Team Building Ideas: The team building kit for managers with team building exercises, activities and games to build winning teams today! and learn how to manage your team through change. You’ll discover how to effectively respond to your team’s deflated performance, complaining and overall disenchantment by learning not to over facilitate, using targeted communication tactics and changing the team’s objectives.

Next time you’re tasked with coming up with a good “bonding” activity for your team, take a cue from today’s event planners. In the past five years, more companies have veered away from outdoor team building—organized sports and ropes courses—and are trying nontraditional events.

The best events tie in somehow to a company’s core values and have a philanthropic element.

Liven up your workplace with one of these morale-boosting team events:

Make sure your team is working more like the Manhattan Project and less like Enron. Three ideas: